Used to combine the world of Tequila with Games.

Anyone require a shoe? 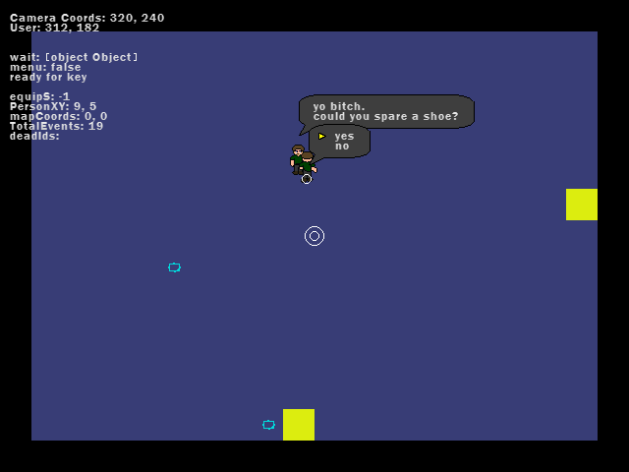 After some messing around and attempting to figure out a good template/system for handling dialogue and all of it’s limitless possibilities, I think I’ve come up with a decent solution to the issue. None of the dialogue is currently hard coded into the game. Each entity/NPC (basically anything that can talk), will have its own unique save file with all their dialogue printed into it. Each text block has a few special qualities attached to it besides just the text. They ca have a remove tag, which takes something (if the user has), they could have a choice tag, which requires the user to pick a choice, or it could have a lock tag at the end where the character shuts up after the last dialogue.

There are still quite a few options I want to incorporate into this system, first being having a detector for some people to react differently to what item is equipped, speech might change when the user has a specific special/normal item in their inventory, have the NPC move/disappear after some dialogue/item/etc. Multiple speech paths at the same time.

So many options to come!

I worked a ton on saving/loading on the weekend, now everything tends to be in order. I now save more of the user information, where they are in the map, the camera shifts/positions and the user’s inventory. There’s also now a rough main screen that allows the user to choose a new game, or load a game (if there are saves). The controls for these menus have also been re-vamped, I switched the menu screen and the save screen keys with each other for a better feel. Of course though, eventually, these keys will be able to be altered by the user at their discretion. The functionality is already there, just not the practical part of it, it’s on the docket.

I’m going to continue messing around with the dialogue and attempt to clear up most of the needed possibilities that I’ll require. Then I’ll probably shift back to the in game menu to further clean that up. After that I’m planning on adding more map interactions and eventually leading to…. tiles!

This site uses Akismet to reduce spam. Learn how your comment data is processed.

Home of Defiant, Defi… mainly known as Mike. Now, 36 year old male that drinks beer and makes a killer long island. Main passion is hockey & golf, but I’ve dabbled in game making for nearly two decades. Flagship project being Mouse, however, its been a crippled beast for as long as life itself, but is slowly making an appearance.

I’ve completed Traders (Catan) which has had 2 releases, and Canasta (card game) which also has two iterations.